The one thing standing in the way of climate action is money. But let's presume for a moment that this is changing. That attracting investments was easy. That large-scale climate action had a straightforward funding process. What should cities do if they had all the money they needed?

The Billion Dollar Series is about where funds should be invested once they are unlocked. City climate financing can be scaled. In fact, we think it will be scaled (remember where you heard it first). Time to set the scene for city climate action with all the necessary resources.

We sat down with climate strategists and mayors in Scandinavia, Germany and the U.S to figure this out. All have, in one way or another, worked with urban green financing. This conversation was a chance to play with the idea of a sudden spike in the municipal bank account.

What should a city do if they had the money they need for the transition today?

What if you had a billion dollars for city climate action? The answers - from Cincinnati, to Mannheim and Heidelberg, Tyresö and Västerås – boiled down to three key areas:

“The good thing”, begins Dominik Stroh, Climate Strategist in Mannheim, is that “the sooner we’d invest, the better.” Let’s take a look at how cities across the Northern Hemisphere would spend a billion dollars if they had it.

If Dominik had an extra 1bn euros on the municipal bank account, he would start with energy. That’s where it all starts. Or perhaps better put: he would invest in the absence of even needing energy in the first place.

Betting on renewables. With Mannheim having the biggest coal powered plant in Germany, no wonder renewable energy generation is in focus. Here, the problem for the municipality is that climate action is a cross-sectional task and the city has less direct influence on coal powered energy generation. One solution would be to push the expansion of renewables to network stakeholders so that the cross-sectional aspect is not only a great challenge, but a huge opportunity.

It’s time for solar on roofs. In Tyresö in Sweden, Felix Ockborn – Sustainability Strategist – would make the investments needed to reduce the energy used in the city’s own buildings. He would make sure we recycle much more of the waste heat created in the city in the district heating grid. While at it, he would use the opportunity to invest in solar panels on roofs at large scale.

Jumping on the green buildings trend. In another part of Sweden – in Västerås City – (Yes, for all Game Of Thrones’ fans: just like Westeros) Magnus Hellstrand, the city’s Climate Coordinator, is puzzled. He’s had his fair share of exposure to green financing processes and knows that often a social trend or cultural shift is needed for funding to be available in the first place. Luckily, in the European market, there seems to be a trend for energy efficient buildings – because the most popular investment category is green buildings. The process is started by analyzing the building stock and customizing refurbishment. That would absorb some dollars to start with.

Transportation: a shift both for people and vehicles

“We’d make a giant investment, building electrification, public transport and efficiency. The key investment would be either infrastructure or vehicles.”

Oliver Kroner, Director of the Office of Environment & Sustainability, Cincinnati

Adapting transportation to make better cities comes down to two things: shifting people to move with biking, walking or public transportation – or – changing the vehicles. It’s all about achieving human needs with as little energy resources as possible.

Tireless transit improvements. In climate action terms, Heidelberg is a veteran. As one of the 100 Climate-neutral Cities in the EU, they are well aware of the effort needed to shift from high-carbon to low-carbon mechanisms. “In Heidelberg, 80% of the citizens are not using cars. 40% are using bicycles. Still - we are not climate neutral. That’s why I would invest in large-scale shifts for all transportation and energy use.” The Mayor of Heidelberg, Prof. Dr. Eckart Würzner says.

Fixing a bus fleet face-lift. In Västerås, Magnus thinks in a similar way. He would improve existing bus fleets. Buses could do the same journey as trains have. “Not much has changed in buses since the 1970’s. What if open wi-fi, charging points and separate bus lanes became the standard?” This would make public transport more comfortable and attractive, whilst still serving the same human need. In the long term, these investments will nudge cultural shifts. Dominik too would put some funds into making local public transport more attractive alongside a general investment in Research and Development.

Some EV’s too, perhaps. Across the pond in Cincinnati, Oliver Kroner and Robert McCracken know the importance of transitioning to carbon free transportation options. They are already thinking of transit infrastructure, electric vehicles in the city’s fleet, and support of the installation of  solar and storage for electric vehicle charging.    Cincinnati are keeping an eye on both the Infrastructure Bill as well as the Inflation Reduction Act, to see how the legislation can be leveraged to advance projects that  improve their city. 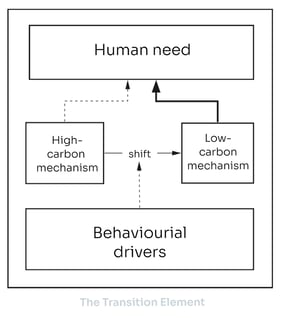 “I would restore the wetlands to strengthen the ecosystem services they provide. This would reduce the leakage of greenhouse gasses and instead create more carbon sinks in the municipality.”
Felix, Sustainability Strategist, Tyresö

In Tyresö, the ecosystem restoration work has already started. But Felix would love for it to be done at a large scale. Both people and animals benefit from solid ecosystems and the resilience it creates.

Adapting to weather extremes. With a city more in tune with nature, people would be more balanced and healthy. It could also be a strong buffer for weather extremes. Over in Cincinnati, Oliver Kroner is also thinking about adaptation, and says that an extra billion dollars “could be an opportunity to invest in stormwater management.” The city has experienced an increase in severe rain events which place a strain on the city’s infrastructure. Nature-based solutions and green infrastructure would not only help address stormwater issues, but would also  have a positive effect on the socio-economy of the city. ‘Increased tree canopy and access to greenspace’ are already focus areas in the city’s  Climate Action Plan.

Getting that green access all across. Johanna Kunzendorff, Climate Adaptation Manager in Mannheim, explains how the loss of species is an underestimated crisis. She would make a net criss-crossing the city and add dry and wet green access areas - both small and large – across the city. The green net would also help to cool down urban areas suffering from heat in summer and to develop Mannheim as a sponge city. The city would both be more resilient to weather extremes and more habitable for different species. Nature is a hack for better cities.

Think big. Think forests. The contemplation in Västerås is similar, especially when it comes to Sweden’s natural forest. Cities are typically embedded in forests. The problem is that highways can cut right through it – “so if we for instance put infrastructure underground – or build bridges over highways – we can let animal habitat stay more natural. Let’s assume that it can be done in a climate neutral way.” He sees how having a holistic approach – think 2030 Agenda perspective –  can enhance natural carbon sinks and boost biodiversity. That’s where Magnus puts his final dollars.

No doubt, there are a lot of things that could be done with extra pocket money. From Europe to the U.S Midwest, cities agree that financing is a complex –  but essential – nut to crack. The sentiment among climate strategists is that investing as soon as possible “will save money in the long-term." This is right. For every kilometer you shift from car to bike, you save roughly 200g of CO2. Over the years, that accumulates to millions in health care costs and fuel expenditure and decreasing city operating expenses. In practice, it’s about finding projects – or bundles of aggregate projects – big enough to invest in. In conclusion, the Mayor of Heidelberg says:

At ClimateView, we think that big investments begin with standardized Climate Action Plans that can be turned into standardized Climate Investment Plans. In the Billion Dollar Series, we will continue sharing the best ideas from city people, banks, techies and finance experts. Stay tuned.