The city of Helsingborg, one of the oldest cities in the Nordic region deserves greater acclaim. An innovation powerhouse, Helsingborg fuels its ambition with well-thought-out plans and initiatives, which earned it the title of Sweden’s most environmentally-friendly city four times in a row, as well as multiple other titles, including Entrepreneurial municipality of the year 2017, Best Municipality 2016, Swedish IT municipality 2015. 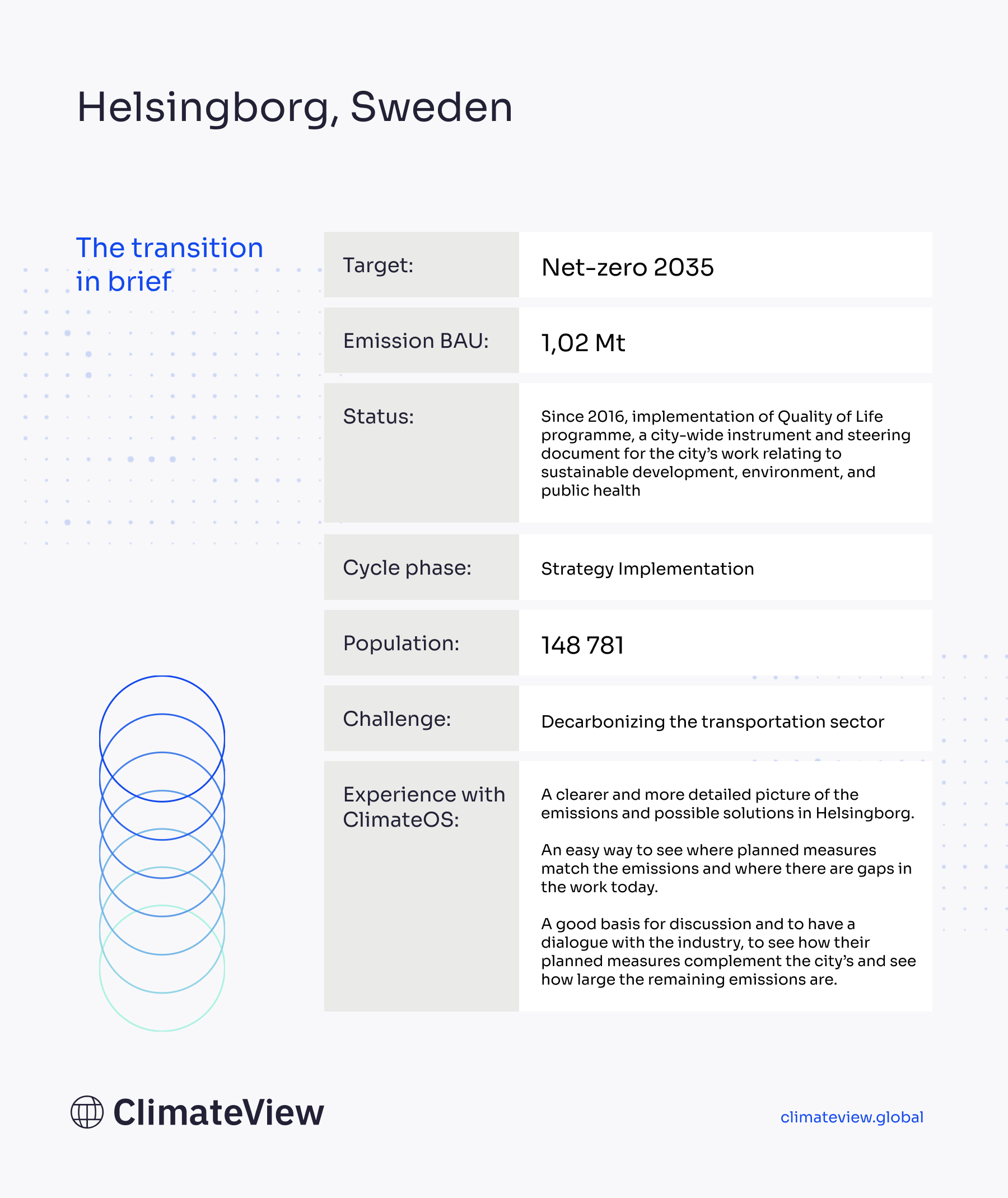 So what is Helsingborg’s winning formula? We sat down with Elin Sundqvist, environmental strategist (focusing on climate issues) at the city’s Department of Environment, who revealed what makes things work so well in Helsingborg.

Going above and beyond

Ambition has set the tone for the city’s success. Taking in Sweden’s net-zero goal of 2045, Helsingborg is determined to reach net-zero 2035, one of the earliest dates set among Swedish municipalities. As Elin explains, ‘Helsingborg has the political will to be a frontrunner in climate and environmental issues. In our planning, we start from national and international goals and then we try to exceed them.’

And this has other implications. The city’s environmental strategists diligently exceed what is asked of them. They aim to go above and beyond municipal boundaries, and lay out measures for consumption-based emissions, which reach beyond the city’s jurisdiction. While it is best practice to take responsibility for emissions outside one’s boundaries, also known as scope 3 emissions, it is a very complex process and not compulsory.

All this innovation, drive and energy has led Helsingborg to reduce its emissions by 52% since 1990. But where Helsingborg stands out is in its realism and the willingness to make the following assessment: ‘having halved emissions is certainly an achievement but the rate of emissions reduction remains far too slow’.

And they are right, given that Swedish municipalities need to reduce their emissions by 12 to 15% every year based on the remaining carbon dioxide budget to achieve the Paris Agreement. However, more than ever, this attitude and transparency needs to be revered and emulated. After all, a problem well-stated is a problem half solved.

The city’s emphasis on its consumption-based emissions is also telling of its holistic approach. Leaving no stones unturned, the city pays attention to how its actions and policies affect the environment, the welfare and quality of life of its citizens and weighs them equally. This is visible in their quality of life programme, launched in 2016, which received widespread acclaim for combining national, regional and local goals for public health, environment and sustainable development.

ClimateOS fed into the city’s holistic approach, helping it to gain ‘an overall picture of the city’s climate work, to understand the effect of individual measures and how much it will contribute to emissions reductions.’ As can be seen in the city’s ClimateBoard, unlike most European cities whose highest emitting sector is energy, Helsingborg’s (and most of Sweden’s) largest source of emissions and biggest focus is transportation. This is the result of Sweden retrofitting most of its building stock in the 1970s and 80s, and very little fossil energy is used for district heating. 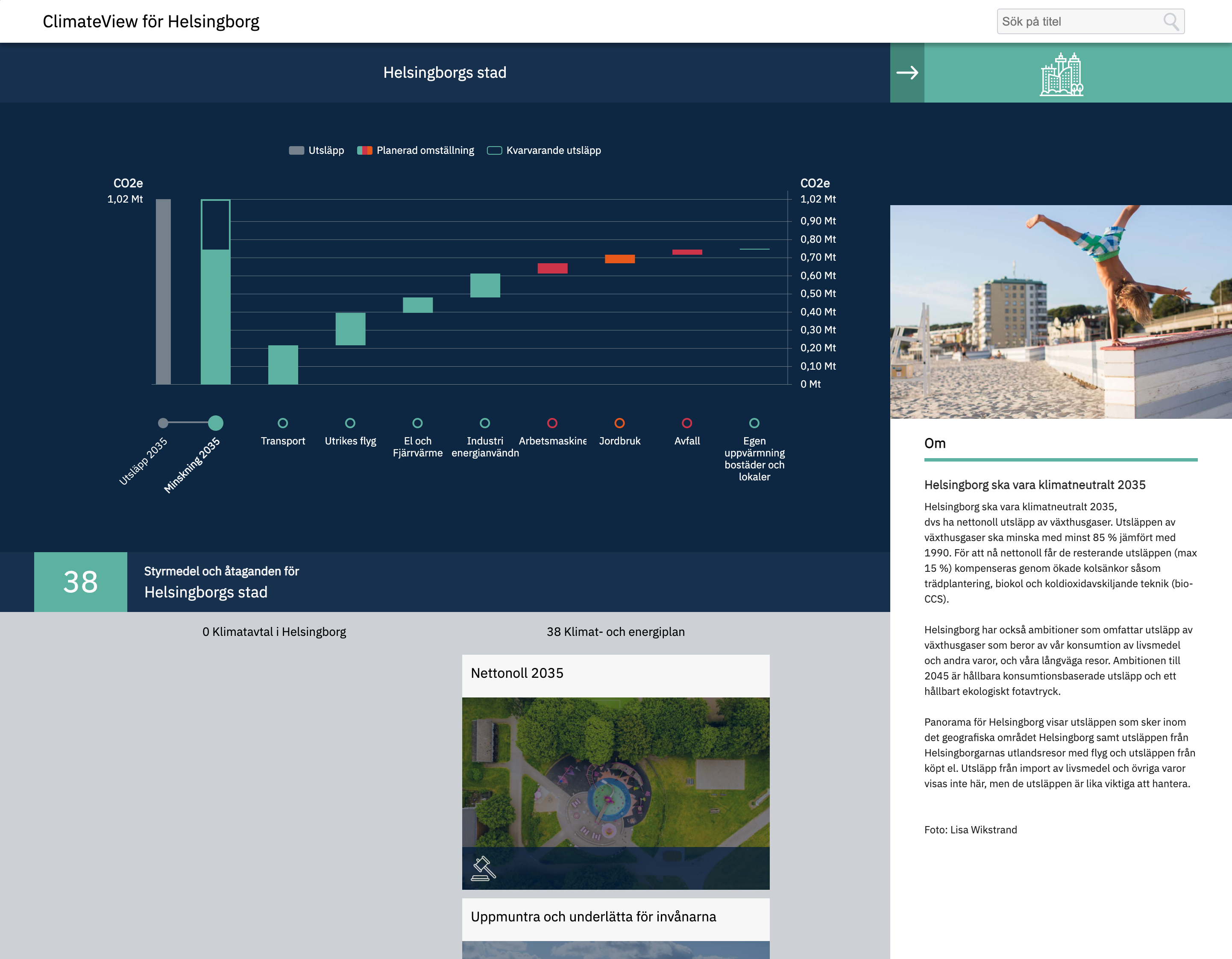 The ClimateOS breakdown of the transportation sector and four other sectors allowed the city to ask whether they were focusing on the right measures and to not only show what remains to be done to achieve climate goals, but also how large are the emissions reductions that the city departments and city companies can achieve, as well as what effort will be required by other actors.

Even more interestingly, as part of its holistic view of the climate challenge, the city does not shy away from the gaps in its transition, instead taking an upfront and honest look at the state of their climate plans. This has in part been made possible through using ClimateOS, which has “really helped to get a clearer and more detailed picture of the emissions and possible solutions in Helsingborg. It became easier to see where our planned measures match the emissions and where we have gaps in the work today.”

The city’s holistic view of the climate challenge can also be felt in their insistence on leaving no voices out. The city makes a point of hearing from both citizens and businesses alike, and believes that it is not a battle they can win alone. So much so that Helsingborg has recently launched two Helsingborg agreements (Helsingborg avtalet), similar to the Paris agreement but at the local level, with businesses on one hand and citizens, including children on the other. The agreements are foremost a way to involve more companies, organisations and residents in the climate transition, find ways to collaborate and exchange knowledge to actually achieve emissions reduction. When the different actors sign the agreement, they show that they stand behind the city's climate ambitions, but they also undertake to reduce their own emissions, as they are asked to formulate what actions they will personally take to reduce their emissions.

‘We need to learn from each other’

As such, another important takeaway from Helsingborg is its inclination for collaboration and trust-based governance. Beyond the Helsingborg agreements, the city puts great emphasis on cooperation between city’s departments, municipal companies and other actors in Helsingborg. The climate plan, with its 2035 goal sets the framework, but the city’s departments and companies themselves decide which activities they consider make the biggest difference in achieving overall ambitions. This means that a lot relies on city departments and companies’ willingness to cooperate, find solutions and complement each other.

That is where Elin Sundqvist’ role comes in. Elin is responsible for keeping an overview of all these complex and intricate patterns, relationships and actions, and of identifying development opportunities and facilitating collaborations and networking between departments, municipal companies and other stakeholders.

The city of Helsingborg has worked with many municipal companies, including Öresundskraft, the city’s energy agency. The agency has worked side by side with the city of Helsingborg and has put a lot of work into developing the city’s plan on ClimateOS, and delineating what their emissions are, and how they can abate them by 2035. The agency’s very detailed knowledge of energy systems has provided very good insights and inputs when it comes to quantifying and devising solutions linking energy to construction, heating, transportation and industry. This type of collaborative work creates a common roadmap, and ensures alignment, and reinforces confidence in the city’s targets and vision.

Looking back on this process, Elin finds that ClimateOS was instrumental in facilitating collaboration. Working together on the board, and showing the impact of their proposed solutions on carbon abatement ‘serves as a good basis for discussion [and makes it possible to] have a dialogue with the industry to see how their planned measures complement [the city’s] and see how large the remaining emissions are.’

Another key element in Helsingborg’s climate journey is that the city has not waited for its plan to be perfect, and fully-fledged. In fact, Helsingborg published its ClimateBoard while it was still under construction. As Elin explains ‘there are still adjustments to be made to give a more nuanced picture of Helsingborg but we chose to publish our board so that other stakeholders in Helsingborg can contribute and participate in the development. We’ll learn along the way’.

Effective climate planning is an ongoing experimental process, which depends on quality discussions and exchanges and more than a few pairs of eyes for continual improvement.

What’s next for Helsingborg?

Asked about what makes her feel positive about the challenge ahead, the city’s climate strategist is hopeful due to the increasing awareness of the climate issue and the great willingness among many to contribute to the change, but also due to the lessons of the past year, which have shown that we can make big changes in a very short time. The plethora of creative and exciting projects around the world with the potential to be scaled up is also a reason to rejoice. And Helsingborg is certainly not a bad place to be when it comes to exciting projects and initiatives.

In 2022, Helsingborg will hold the H22 city expo, an international event to catalyse its journey further towards becoming a smarter and more sustainable city. The city will also begin developing and planning for their 2024-2030 climate and energy plan using ClimateOS to inform their strategy and also hopes to use ClimateOS to follow up on the local climate agreement initiative, both to show the commitments of individual actors and to show what they can achieve as a group.

Challenges and opportunities in reclaiming control of net-zero