A growing body of evidence has shown that inner transformation is needed to foster sustainability and resilience. Mindfulness and compassion practices have proven effective to develop such capacities. With the Mindfulness Initiative, Jamie brings the inner dimension into policy discourse and endeavors. What can be done to alleviate barriers to climate action? In this interview, our second Climate Pioneer walks us through the psychology of sustainable behaviors, such as:

Separation of people and planet

The point of departure at the Mindfulness Initiative is that as humans, we have become separate from ourselves from our own inner compass, our emotions and our own bodies. Jamie and crew see this as being a driver of the climate crisis. We wanted to know how this plays out at scale, and what that can be done.

ClimateView: The climate emergency has escalated over the past decades. .During the same time span, you've helped introduce mindfulness training to parliaments around the world - tell us more.

Jamie Bristow: The IPCC reports have largely been saying the same thing for over 15 years. Why haven't we acted? Experts and policymakers are starting to bring in the inner dimension of the situation – the personal psychological, but also cultural collective inner dimension. We have the policy instruments, we have the technology, we have the science, the thing stopping us is within our culture, and within our own minds.

People talk about saving the planet, as if that's separate from ourselves, rather than saving ourselves.

Some policymakers are interested in how really it's our psychology and our culture driving the climate crisis in the first place. The most recent IPCC report on mitigation and adaptation published at the beginning of 2022 mentioned phrases like “inner transition towards sustainability” for the first time. People like Christiana Figueres, the former Secretary General of the UNFCCC also a leader in this area, talks about the importance of mindsets being the place from which the changes that we need to see will happen. All of us need to shift our mindset, that means our values, our intentions, our beliefs, or worldviews. These things are seen as primary by some leading policymakers and advocates. 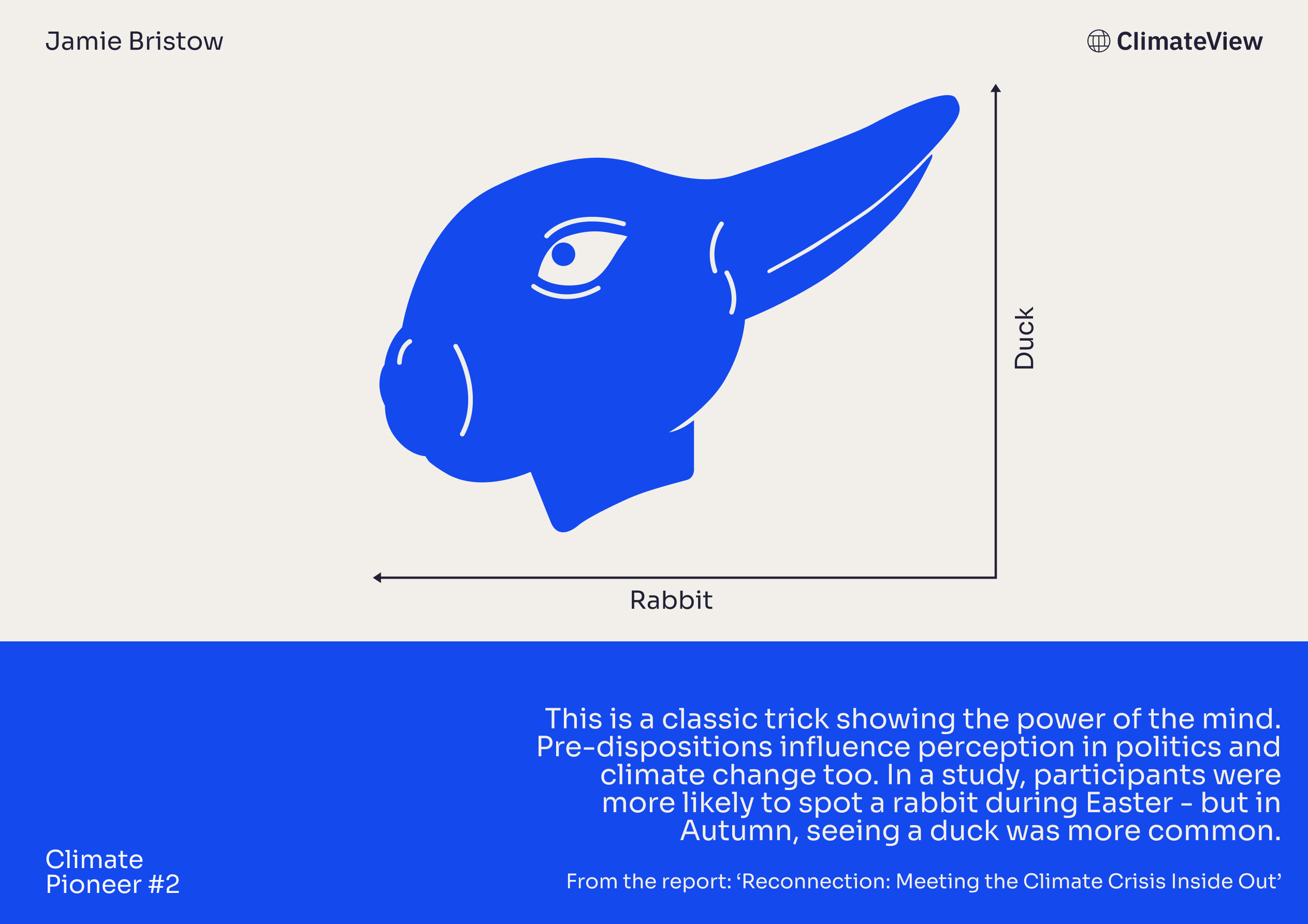 ClimateView: You are working with some of the leading scientists in this area. You've documented evidence-based ways in which people can cultivate certain aspects of their inner life to become more resilient and foster greater climate action. What are the narratives around the mind and climate?

Jamie Bristow: The European Commission has a budget for an inner Green Deal program to help their policymakers. We have a case study in our report ‘Reconnection, meeting the climate crisis inside out’. In documenting this shift, we interviewed about 26 politicians and policymakers working at a global level, and consulted 100 of the experts working at the intersection of inner and outer sustainability. And we asked them, if you talk about the inner dimension, how do you talk about it? And really tried to pick up how people were thinking about this already. We have just published an academic paper where we found that the understanding fell into the following categories:

I. The mind is a victim of the climate crisis

87% of young people are at least moderately worried about the climate crisis. And I think something like 40% are extremely worried. These are people under 25 years old. They have each of the following emotions – sadness, grief, anxiety, depression –that they say is related to the climate crisis. So this is stopping them functioning in daily life.

This is already a driving factor for a whole generation and that message is getting through to many politicians.

And then that's really kind of the only high profile way in which this is considered in policy so far.

II. The mind is a driver of the climate crisis

This is our kind of lens we see the world through, our primary story or narrative or image that we use to understand our position in the world. And this goes back hundreds, if not thousands of years. So in Western thought, we tend to think of ourselves as at the top of a pyramid of power, in dominion over nature, and in fact over other human beings who are less worthy than we are. In other worldviews, particularly indigenous worldviews – but also in the kind of pre-modern cultures in the East, they saw that:

Human beings were seen in a harmonic web of life, where any action had a ripple effect across the chain of interdependencies.

This hugely shaped how our cultures evolved and interacted with other cultures around the world (...). And this is a real driver of our attitudes.

III. The mind is a barrier to the climate crisis

It's the domain of eco psychology. We know that we have these certain biases, they interact with many other types of threat and predicaments, and they predictably are interacting with the climate crisis. From terror management theory to confirmation bias to the discounting bias, which discounts problems in the future versus problems in the past and present. And these can be better understood, and we can intervene on those at a population level, but particularly at the leadership level.

We can train people, to understand one's own biases, and have mindful awareness of own limitations, and how these will cause havoc when it comes to solving complex problems at a global level.

Some policymakers who are aware of these three, are also aware of some kind of interaction between them. These are all interdependent relationships. And there are some reasons to believe that as climate change gets worse, as our societies get more decadent – that is, the struggle to maintain current levels of living standards and public services, as the world gets tougher, supplies get harder to come by – climate action might get harder. And in fact, just the anxiety and the grief that is caused by the knowledge of climate change, rather than into action, some circumstances could lead to us actually buying more stuff (terror management theory).

So we should understand how these relationships act in vicious cycles, and flip those into virtuous cycles, from a breakdown loop to a break through loop.

And we're not going to do this without some understanding of the psychology of the cultural dimension, and in ways in which we intervene.

ClimateView: Your work taps into the potential of decision-makers and citizens' inner capacities, and has identified contemplative practices to help improve environmental-related decisions and sustainable behaviors at large. Tell us more.

Jamie Bristow: There's been a recent meta analysis of different programs that could be used to increase sustainable behaviors and attitudes and in about 30% of those papers, in some way mentioned mindfulness, which is often dismissed as  a buzzword when it's thinly understood, I can see why it is dismissed by many people.

Essentially what we're talking about is awareness, attention, regulation, receptivity. If we are not paying attention to a problem, how can we solve it? How can we impact our thinking and our behavior, if we're stuck? How can we see the full situation? And how can we flip between those views? And mindfulness training is a training of the mind in ways that make us have better regulation of our attention, have broader receptivity to different types of information and stimulus, and help us change our perspective. And some people define mindfulness exactly in those terms, open to novel information and the ability to change perspective. And that's what our report, Reconnection: Meeting the Climate Crisis Inside Out touches upon, it goes through different domains of this inner dimension.

Meditation basically just means cultivation, there isn't anything sort of woowoo or mystical about it.

There is a growing understanding that what we used to think was fixed past childhood is actually very much trainable. Neuroscientists use the term neuroplasticity, meaning  the activity of our brains can change, the shape of it can change. And we can change quite radically, even past childhood. And things that we repeatedly do, intentionally can lead to radical changes.  (...) The best way to understand that is as a natural human capacity, to be present in the here and now with what's going on inside of yourself with an attitude of openness, curiosity and care. And it's pretty helpful in our relationships. So, not just in the short term, but in the long term, you can become more of those things. And mindfulness training delivers those and would evolve practices that people might associate with the word meditation, some people just call them mindfulness exercises.

ClimateView: Tell us about the Beyond program, and how mindfulness practices can be leveraged to improve decision-making among policy leaders?

Jamie Bristow: So this is a case study in which European Commission officials take part in what the training provider calls the integrated deal initiative, which helps them to learn in order to become climate leaders, while developing mindfulness and compassion as capacities.

The program is for leaders to be able to act more effectively together.

It is an online program, where they're learning about our own stress physiology, or the importance of compassion and how emotional intelligence works, cultivating those things. And in our report, our case study mentioned the initial results of some of that testing.

We can learn a lot from looking inwards. Until recently, the inner capacities of citizens and leaders were overlooked in climate responses. Groundbreaking research brings into light the importance of cultivating such dimensions to foster more robust and comprehensive climate action. As such, the latest IPCC report explicitly mentions the role of “inner transformation towards sustainability”.

Our second Climate Pioneer Jamie Bristow has dedicated his career to transforming mindfulness into impactful action, training leaders worldwide for better decision-making. What can you do to incorporate mindfulness, day by day?