Nottingham is a sustainability frontrunner, boasting the highest per capita reduction of core city emissions in the UK, with a 52% per capita reduction since 2005. For the last 20 years, starting with the Nottingham Climate Change Declaration, Nottingham has shown its climate leadership, alongside the development of various key strategies including those for Climate Change, Energy, Transport and Fuel Poverty. Today, the city is resolved to become the UK’s first carbon neutral city with its 2028 target.

So what is Nottingham’s approach to climate planning? What are its markers and learnings after more than two decades of climate planning at the local level? We spoke with Rachel Unwin, Senior Carbon Neutral Policy Officer at Nottingham City Council, about the city’s transition so far and the road ahead. 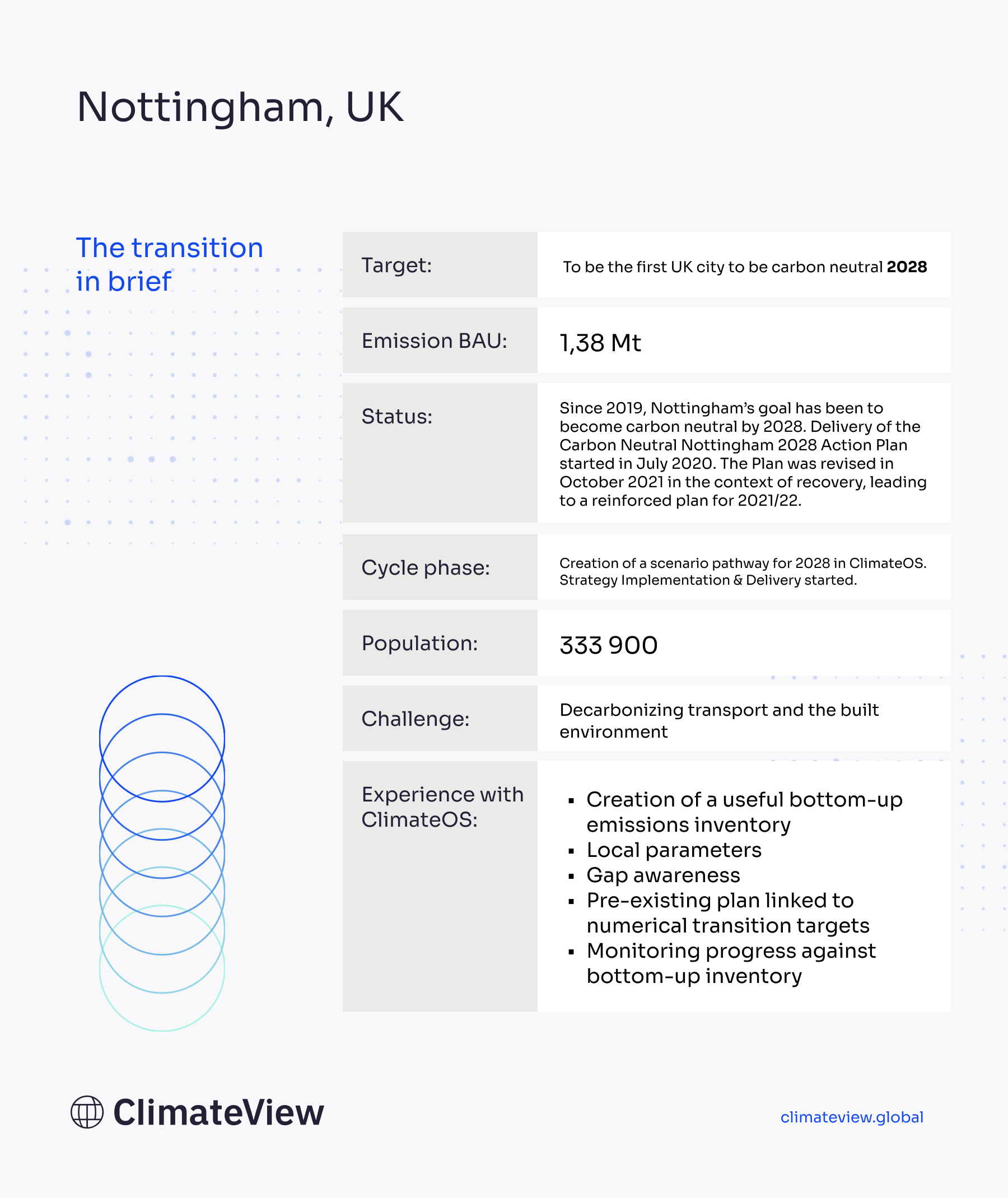 A pragmatic, science-based and broad-based approach

Carbon budgeting as a starting point

Nottingham’s approach to climate planning is ambitious but also pragmatic and science-based. Carbon budgets are aligned with climate science as they are indicators of the maximum cumulative amount of carbon dioxide that can be emitted to the atmosphere to be in line with global temperature rise well below 2°C. Just as climate change depends on the cumulative amount of emissions in the atmosphere, carbon budgets are cumulative calculations and are therefore more realistic than "point-in-time GHG reduction targets for total emissions produced in a single year, decades into the future". And yet, carbon budgets are not yet widely used instruments.

However, Nottingham has seized the opportunity to create a plan that is truly science-based. In 2019, as it assessed that its carbon budget will run out by 2028, the city released the Carbon Neutral 2028 Charter to achieve carbon neutrality by 2028 and tackle climate change across the city, positioning it as the city with the most ambitious climate target in the UK. In January 2020, a Climate and Ecological Emergency was declared in Nottingham, marking the beginning of the draft action plan consultation process. In July 2020, the delivery of Carbon Neutral Nottingham began.

Carbon budgets also provide unmatched accountability since one has to ensure that the amount of emissions released until that date remains within the allocated budget. With such a close target, Nottingham was confronted with two choices:

The city chose the second more challenging and more responsible option. Nottingham began to deliver on its plan immediately, thereby showing true leadership and its determination not to jeopardize its chances nor to skimp on a quality climate transition.

A thematically and organizationally broad-based plan

The city of Nottingham opted for a broad-based plan. This involved targeting carbon mitigation in all sectors, from transport, to water, to energy generation, then extending further beyond mitigation with the cross-cutting themes of resilience and adaptation. The city also looked at issues of behaviour and culture change to discover how the City Council can lead the whole city.

However, the plan is not only broad-based thematically, but also in the quality and breadth of its governance and collaboration model. Representatives for each thematic area of the plan report to an internal Implementation Group and Board. This is chaired by the Council’s second most senior Councillor: deputy leader and portfolio holder for Energy, Environment and Waste – Councillor Sally Longford, and the group is very closely linked to the Council’s Executive Board, and via them, to external stakeholders.

Beyond this, the plan has broad support as it is backed by the city’s Green Partnership, which consists of partners from public, private and voluntary organisations, including “businesses, researchers and city officials in each of its working group areas.” Together, the partners work to reduce the city’s environmental impact and to provide a genuine city-wide response as well as “building towards wider sustainability for Nottingham.”

Working with the ClimateOS platform when you already have a plan

Nottingham was one of ClimateView’s first pilot cities and began working with the ClimateOS platform in July 2020. By then, it had released its fully-fledged Carbon Neutral 2028 action plan. The aim of starting to use the platform was not to create an entirely new plan, its goal was instead twofold:

The city began by setting the parameters as locally as possible using local data already available in Nottingham. It then went on to create a bottom-up emissions inventory, using proxy indicators and the hundreds of pre-defined parameters available on the platform. This resulted in a more precise assessment of local activities’ emissions than those based on national datasets.

For Rachel Unwin, this type of inventory “is much more useful for us. Within the UK’s national datasets that are split down to the local authority level, various assumptions exist which we know are not actually the case for Nottingham. For example, there is the assumption that all buses are diesel, whereas a large proportion of Nottingham’s bus fleet runs on biogas.”

The result is therefore a much closer and more in-depth inventory, with hard numbers, attached to various local activities and realities. This enables Nottingham to make better, more informed and granular decisions on where to focus, what to prioritise and how to tackle the emissions at hand.

Rachel adds that with this method, they are less “reliant on data that is 2 years out of date, as is the case with national data. Next year, in 2022, we will have the 2020 data for Nottingham’s emissions but will be 2 years past that. We can’t go back in time and change what has already happened, but we will have an indication of whether we’ve achieved more than BAU reductions or whether we’re still on that same trajectory. Using ClimateOS, we gain an extra year on these insights.”

Striking a balance between optimistic and realistic targets

The next step for Nottingham was to strengthen the actions and link parts of the plan to well-defined targets, for example aiming for specific emissions reductions in particular areas by a certain point in time. Given that there are several key parts of the Nottingham Carbon Neutral Action Plan which specifically relate to carbon reduction activities, various delivery areas and activities included in the plan were carefully plotted in order to obtain clearly delineated emissions trajectories in the ClimateOS platform.

The climate strategists took the initiative to set the numerical targets and trajectories for each of the plan’s delivery areas and actions to be as optimistic as possible within the ClimateOS platform, while keeping in mind what is realistic within the policy context for Nottingham and the UK in the next six years. The aim was to set a “maximum to what is realistically achievable in the city,” Rachel explained, as well as a best case scenario of the emissions reduction potential in Nottingham based on its action plan.

As a result of this target setting process, the targets set by Nottingham in the ClimateOS platform tended to be above and beyond the action delivery calibrated within their CN28 action plan.

Reaching the carbon neutral target in time depends on gaining a comprehensive and cumulative overview of targets’ and actions’ impacts, in order to assess if the planned actions are enough and whether they set up the city for success. Rachel points out that they “had made an initial estimate using other tools, prior to using ClimateOS, but because you are not able to tailor the targets as precisely to your own city or local factors, it's harder to have an understanding of how it would play out for Nottingham itself.”

With ClimateOS, the city was able to pinpoint where the plan could potentially fall short and readjust targets and actions quickly to ensure success and ensure its best case scenario of emissions reductions was followed as closely as possible.

What’s next for Nottingham?

Once aware of the total projected emissions reductions towards the overall target, it is possible to plan how to increase these further. Nottingham is in the process of creating a scenario pathway in which the city achieves carbon neutrality by 2028.

To create this scenario, greater enabling shifts are needed. Nottingham will need to either increase or stretch its targets and their corresponding emissions reduction to an even greater extent or look at other shifts to maximize and ensure an adequate emission reduction against their 2028 goal. Most importantly, close attention will need to be paid to the drivers that will make these shifts happen and to the actions that need to be added to the plan to ensure that progress is happening. All of which can be done iteratively on the ClimateOS platform.

Nottingham has begun implementing an annual review of the Carbon Neutral Action Plan, at the outset of which the plan is refreshed, matching the learnings from the ClimateOS platform. Currently completing its first annual review, the team at Nottingham City Council is looking to add those numerical targets identified through ClimateOS to the plan, which did not feature in the original plan.

According to Rachel, “it is an ongoing process, we are continually updating the action plan with what is needed and linking it back into ClimateOS so that we’re monitoring what is going on and how that is contributing to our overall target. We’re also identifying the actions that are needed from ClimateOS and linking that back into the action plan. This is a continuous process to ensure we are getting as close as possible to carbon neutral by 2028.”

Strengthened by this ongoing, two-way process, Nottingham now knows how it is performing, and has all the keys in hand to strategize, align and monitor targets’ progress, and iterate accordingly.

Are we putting too much faith into electric vehicles?